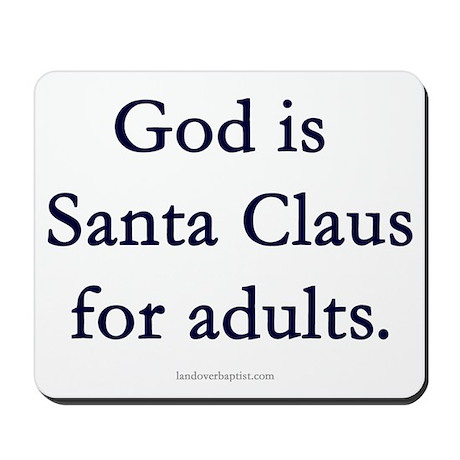 Worship online with us, sunday morning at 10 am, using the links below. And dont forget to pick up your communion elements this saturday, april 11, between 10 am and 2 pm at the church.

Good is santa claus for grown-ups - the book now available on amazon.

The santa claus argument states that believing in god makes as little sense as belief in santa claus - both, say the atheists, are childish beliefs and adults shouldnt think that way. The tooth fairy argument and the easter bunny argument are about the same.

When you are a kid youre told if you behave and act nice santa will give you toys for christmas. Religion is the same thing but for adults but the stakes are raised. Do gods work and allow yourself to be controlled by faith and youll be rewarded with pure bliss in heaven for eternity.

Atheists do this because god, santa clause, the tooth fairy, and the easter bunny are all beliefs that are indoctrinated into children when they are young too young to make rational decisions about such things themselves. They believe such things unquestioningly because adults that they trust have given them the information.